The beginners part of the title refers to myself! This is how I started DX'ing on the FM Band.

Its true to say in a sense that any Band 2 FM receiver will do. If you pick an old one up without RDS and can understand a few European languages then DX'ing can be done that way. But to the easiest way is to pick up a RDS Tuner. There are still basic new ones on the market that will have RDS, some will now be combined with DAB but we are only interested in the Band 2 side.

The other option is a second hand one from eBay. My experiences on eBay with Band 2 FM tuners has been 100%. I have purchased around three now, all at a very cheap price, fully working and even visually perfect. The reason being they have come from people's HiFi systems, not radio shacks!

Another good option which again I have had a 100% success rate is to pop to the local Pawn Shop or Cash Generator Shop as they now seem to be called. Whenever we going shopping in one small town near us I always pop in the shop to have a look and one day there was a nice Sony RDS tuner at a give away price.

Now the hard bit. As I mentioned in Part One the Conrad RDS Manager from Germany is now obsolete. Keep an eye on eBay, but they are now rare. The only option is to use a PC to get the most out of the RDS. This is were it now gets technical as a soldering Iron is required a bit of knowledge with circuitry.

Information can also be deemed from the Internet especially this site:

This Web Site run by Herman Wijnants gives all the information you will need for both the Conrad if you manage to get hold of one or for a RDS Tuner.

You will also find here the various versions of software for the PC. So all in all the ultimate Web Site.

If you don't have a PC or are not confident in the interfacing look for a Sony ST-SB920 tuner. This will actually display the PI Code as well as the PS Name, a few other models from Sony do also. So all is not lost.

I used to use an old Pentium One system. It ran 24 hours a day nearly all year round apart from holidays. The software was RDSS which is a DOS program available from Herman's site. This software will only run on old PC's, 386 up to I think a Pentium Two or AMD equivalent, (K6).

If you are using a Sony ST-SB920 then I have given details here on how to modify it and connect it to a Conrad RDS Manager, directly to a PC or using RDS SPY software. 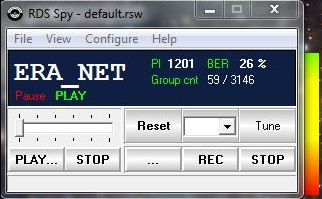 If you prefer the Windows route then RDS SPY software is now the way to go. It is nothing short of BRILLIANT! It can be connected to your PC via the sound card so the only soldering is to the Clock and Data pins on the RDS chip in your tuner. If like me, you want your sound for recording audio then a simple interface can be built so you can use the COM Port on the PC and keep the sound port free. If you don't have a COM Port then a USB to Serial adaptor can be purchased. I would advise using the types with the FTDI chipset rather than Prolific.

RDS SPY can be found here.

Another advantage of RDS SPY is that you can have more than one instance of the program running simultaneously. So if you have two tuners you only need one PC. My RDS SPY setup can be found here. I have four tuners running RDS SPY on one PC. Also the same PC records the audio in one hour segments from two of the tuners, (one tuner per stereo channel), using the timer facility on Audio Grabber.